Kale to the chief (with guest blogger...Foodism Hubby)...

My wife needed a break from the kitchen and the blog for at least one night, so, I, her ‘hubby’, am taking over. What kind of husband would I be if I didn’t occasionally cook a meal or two for my family? Truthfully, before she and I met, I used to be fairly adept in the kitchen, especially when compared to the rest of my bachelor friends. Alas, she is much better in the kitchen, and as you’ve read, enjoys cooking a heck of a lot, so she’s taken the head chef job in our house. But not tonight! Tonight, I have seized the golden ladle, tied on the silk apron and am manning the burners to deliver a dish I grew up with, Portuguese Kale Soup! 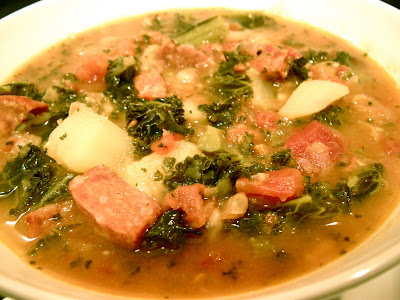 Here’s a little back story on me and the soup. A majority of my family background is rooted in Portugal, but sadly, that heritage is pretty alien to me. I did grow up with grandparents who spoke the language and great-grandparents who were born in Madeira and hardly ever spoke English at all. Sundays would usually consist of our family leaving church and heading to my great-grandmother’s kitchen to sample the tasty dishes still sitting in pots on her stove. I remember being fascinated with the idea she would cook so much and, like a homing beacon, it would attract all members of the family to her house. Her kitchen was a magnet for hungry aunts, uncles and cousins. Crowds gathered, plates were distributed and loud, festive conversations in Portuguese would ensue. Like most kids, I wasn’t into trying different things and boy did a lot of her meals look “different”. Apparently I missed out on a lot of tasty Portuguese dishes. Except for her Portuguese Kale Soup. That one not only looked okay for me to try, but I enjoyed bowl after bowl each time it was placed in front of me. It’s a great hearty soup for cold New England winter Sundays like the ones where we gathered at Va-voa’s house. And I think you’ll enjoy it whenever and wherever you are. Now, I don’t have my great-grandmother’s recipe, nor do I have the one my mother made which was even better, (Hi, Mom), but I’ve been able to pull together a decent soup. Part of it is from internet searches, family memories and a little bit of personal taste. Mom says she would include beef in her soup, which I excluded, mainly because I felt like the Portuguese linguica was meat enough. Most recipes would tell you to use chorizo, but as there are many Mexican chorizo brands out there, I felt the Portuguese linguica was a little more, well, Portuguese. 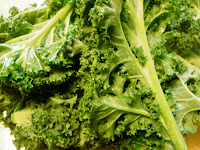 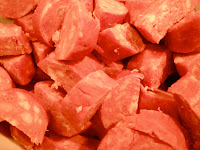 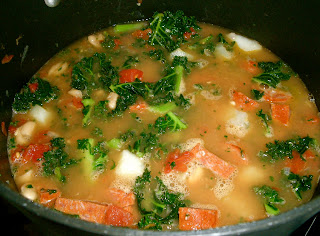 Add garlic, bay leaves, and kale to the pot. Cover pot and wilt greens 2 minutes. Season with salt and pepper. Add beans, tomatoes, linguica and broth to the pot and bring soup to a full boil. Reduce heat back to medium and cook  about 10 minutes longer or until potatoes are tender.