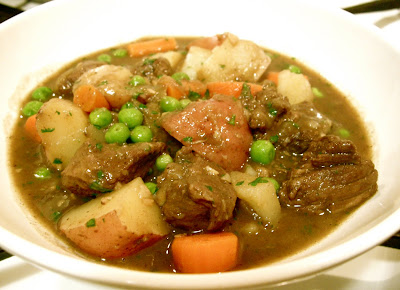 First of all, I have to apologize for the silly puns I use in my post titles. I really can't resist sometimes!

So today I woke up and could not move my neck at all. The heating pad and a hot shower were my saviors. Now it's several hours later and I have regained about fifty percent of movement. Enough to put together the beef stew that I had been craving for weeks. Sorry muffins, you guys will have to be pushed back yet another day.

I've been making so many one pot/dish meals lately. They seem fitting for the colder seasons (ironically, today felt like Spring). Plus there is something rewarding about putting a bunch of fresh ingredients together and through the magic of kitchen chemistry, something magnificent is created!

Beef stew is probably one of my favorites. It's rich in meaty flavor, full of tender veggies and warms you from the inside out. This is the recipe that I always use. It's simple but perfect. You want to start about 3 hours before dinner time. Seems like a long time, I know. What happened to foodism for the BUSY mom? The actual work you'll be doing takes just over a half hour. The stew sits safely by itself in the oven for the other two hours. During that time, I did laundry and hung with the kids. It makes quite a large amount and keeps in the fridge for about three days. Tonight I made some store-bought Hungry Jack biscuits to sop up the stew's gravy. I'm going to try serving it over some egg noodles for the kids tomorrow.

After cutting up your meat, dry off the beef cubes with paper towel and season generously with salt and pepper. Adjust the oven rack to the lower-middle rack and heat oven to 300 degrees F. Heat up a tablespoon of oil on medium-high heat in a large dutch oven or a similar type of pot. Start searing your beef a bit at a time. Do just enough so that there is no overcrowding. Brown all sides of the meat and transfer to a bowl. Keep doing batches (usually 2 to 3), adding a tablespoon of oil with each new batch, until all of it is done.
Your dutch oven should be empty at this point, now add your onions with a teaspoon of salt and saute for about five minutes. Scrape the brown bits off the bottom as you stir around your onion. Add the garlic and cook for 30 seconds more. Stir in the flour and cook for 2 minutes. Add the wine, scraping up the brown bits and stirring until the liquid has thickened. Add the broth, bay leaves and thyme. Keep stirring to dissolve the flour until it comes to a simmer. Return the beef to the pot and when it returns to a simmer, cover and put into the oven. Cook for an hour.
Remove the pot from the oven, add the carrots and potatoes. Cover and return to the oven. Cook for another hour. Then remove from the oven, add the peas and let sit for a few minutes. Finally, remove the bay leaves, season with salt and pepper to taste and gently stir in the parsley. It's ready to eat!
Email ThisBlogThis!Share to TwitterShare to FacebookShare to Pinterest
Labels: entrees, meat, Vegetables