We were having the relatives over for dinner tonight and I wanted to make a big one-pot dish. I had enough ingredients at home to make an improvised paella.

This morning I took out a pack of two chicken breasts, a pound of shrimp and a cup of peas from the freezer. They defrosted in the sink throughout the day. If I had time to run to the store, I would've loved to have added some chorizo and red bell peppers. I also didn't have a traditional paella rice like a Bomba or Calasparra, just some long grain white rice. It would all have to do.

Paella is an old Spanish dish that originates in Valencia (Spain not Magic Mountain!). There are several versions of it, all tasty I'm sure. What I set out to make would probably make a true Spaniard gasp. Unauthentic as it was, my paella made my guests happy. That's good enough for me! 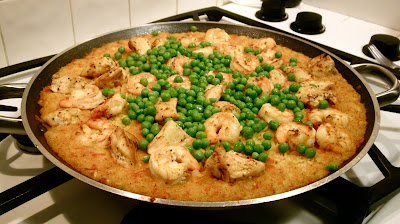 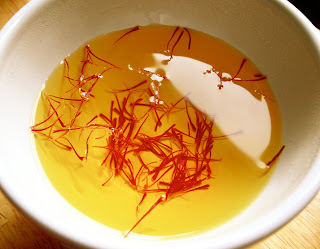 Put a cup of hot water into a small bowl and add the saffron threads. Let them steep while you prepare the rest of the food. 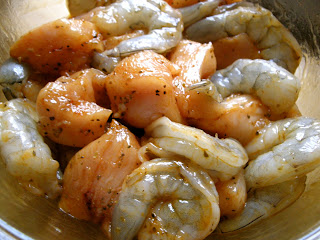 In a mixing bowl, add shrimp and chicken. Generously season with salt and pepper. Add 1 tablespoon of olive oil, oregano and 1/2 teaspoon of smoked paprika. Mix well. Set aside to marinate. 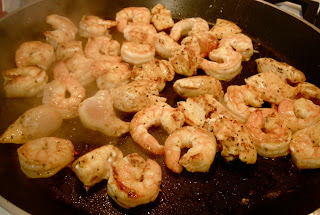 Heat 1 tablespoon of olive oil in a large skillet or paella pan over medium-high heat. When the oil is glistening, add the chicken and shrimp and cook about 2 1/2 minutes per side undisturbed. You want a nice brown crust on the meat. Place in a bowl and set aside.

Add another tablespoon of oil to a  now empty pan. Add the onions, tomatoes, 2 teaspoons of salt, 1/2 teaspoon of pepper and 1 teaspoon of paprika. Cook for about 10 minutes, stirring occasionally. Add the garlic during the last minute.

Preheat the oven to 400 degrees F. 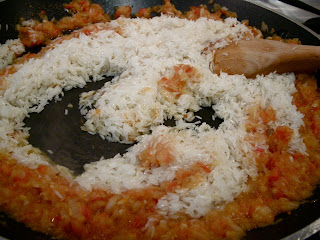 Now add the rice to the onions and tomatoes and continue to stir for about 4 minutes. Add the broth, clam juice and saffron water. Stir everything together and spread the rice evenly in the pan. This is the last time you will be stirring the rice. Bring it all to a boil and turn the heat down to a low simmer. Cook undisturbed for about 12 minutes . 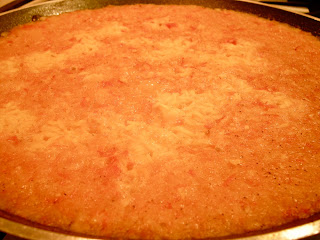 A lot of the liquid should be absorbed by now. 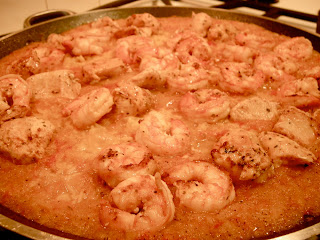 Arrange your chicken and shrimp nicely on top of the rice. Place the pan in the oven and let it cook for 15 minutes.

Take the pan out of the oven and taste the rice. It should be al dente but if you feel it is still undercooked, cover the pan tightly with a lid or foil and let it sit for several minutes until the rice is cooked to your liking. 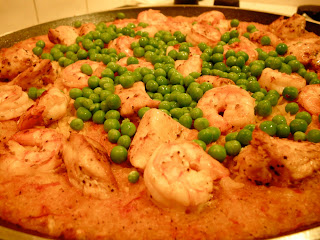 Add the peas and parsley, gently fold them into the paella. Season with more salt only if necessary. Serve with lemon wedges and hot sauce on the side. 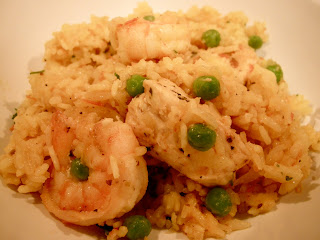