One of my new favorite things to make (and eat) is quiche. I had only made my first one a few months ago but I think I've made about eight since.

They have all been the same kind though -spinach and mushroom. I guess I knew it would turn out good every time so I hadn't strayed.

Well, I finally worked up the courage to try something different. This morning's experiment? Quiche with fingerling potatoes and leeks! 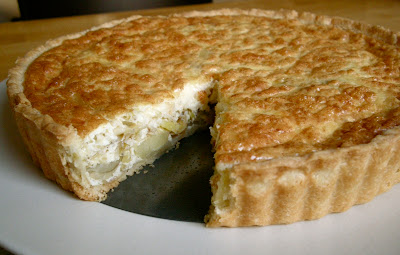 If you are using a frozen pie crust, let the dough defrost a bit by letting it sit in room temperature.

When it has softened, place the dough into your tart pan or pie plate and spread out the dough with your fingers until it fits the pan all the way up to the edges. Then leave it the fridge until you are ready to fill and bake it.

Cook your potatoes by either boiling them for about 20 minutes or until you can pierce them easily with a fork. Or you can put them in a covered glass dish with a couple tablespoons of water and microwave them for about 4 minutes. You want them tender but still firm. Set aside to cool. Cut them into 1/4 inch slices when they are cool enough to handle.

Preheat the oven to 375 degrees F. 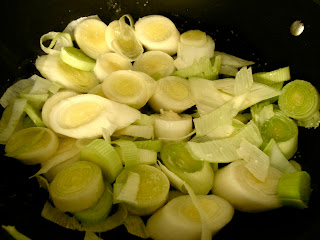 Heat up a medium pan over medium heat. When pan is hot add the butter, olive oil,leeks and 1/4 tsp salt. Cook leeks for 5 minutes. Stirring often and pressing down on them so that all the layers separate and cook evenly. Then add the wine and cook, stirring occasionally, for 2 minutes more or until it evaporates and leeks are soft. Set aside in a bowl to cool. 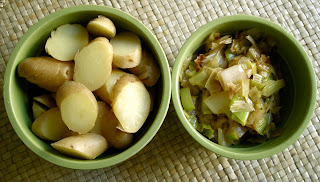 You should now have about 1 cup of cooked leeks and 2 cups of sliced potatoes.

Combine the eggs, cream, 1/2 teaspoon salt and 1/4 teaspoon pepper in a food processor or blender. Blend for about 15 seconds. 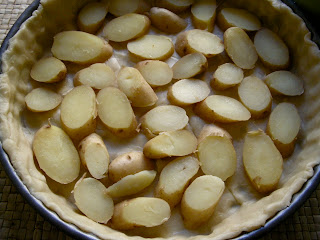 Pour a small amount of egg mixture into the pie dish, just enough to cover the bottom. Then evenly layer the potatoes, 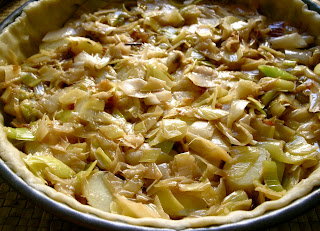 then the leeks and then cheese in the bottom of the pie crust.  Pour the remaining egg mixture on top until it fills the tart pan almost to the top of the crust line without overflowing. Place on a baking sheet (in case it does overflow) and into the oven for about 40 minutes or until the egg mixture is firm and the top is golden brown. Cut into 6-8 pieces. Serve hot or room temperature.