You know the old saying "Everything tastes better with bacon." Okay, maybe there is no such saying but that doesn't make it any less true. Some of you may not eat meat but for those of you who do, you understand the magic that is bacon. It can turn a simple lettuce and tomato sandwich into a little piece of heaven. Heck, I've even heard of cupcakes with bacon in them!

There were only a few pieces of bacon left in our fridge. Not enough to serve to everyone for breakfast. A delicious solution? Spaghetti Carbonara. I added a bunch of peas to mine and some toasted Panko breadcrumbs for a little texture. I also made it less saucy to cut the calories a bit. Not too much though...some things are worth the calories!!! 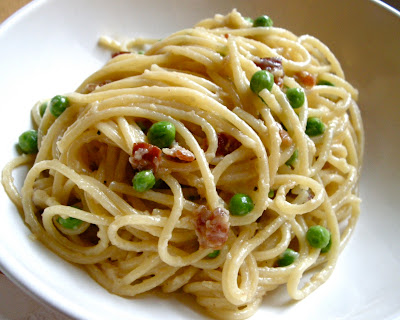 Although this is a relatively easy dish to prepare, it can get a little tricky with timing. It is extremely important that the sauce is ready to go once the pasta is finished cooking. You want the intense heat of the pasta to cook your raw egg mixture.

Start a large pot of water boiling on the stove. 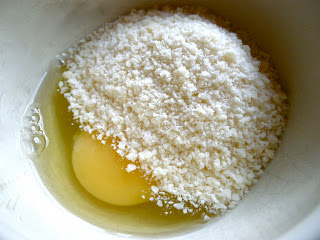 Add the egg, Parmesan, 1/4 tsp of salt, and 1/4 tsp pepper to a small bowl. Mix well until fully combined. Set aside.

Heat a large non-stick pan over medium-high heat. When pan is hot add the olive oil and bacon. Cook until bacon is golden brown and crispy, stirring occasionally (be careful, it can burn easily). 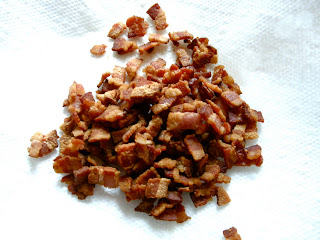 Turn off the heat and remove bacon with a slotted spoon and set aside on a plate lined with paper towel to soak up the grease.

You should have about two to three tablespoons of bacon grease left in the pan. If there is more than that, remove some of it with a spoon.

When water is boiling, add some salt and the dry pasta. Cook according to package directions for al dente.

Five minutes before your pasta is finished cooking, start heating the bacon grease back up over medium heat. When hot (about 1 minute), add the garlic and saute for 30 seconds. Turn off the heat, your pasta should be done about now. Reserve 1/2 cup of your pasta water. 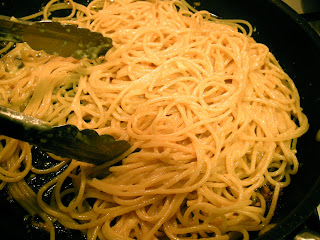 Drain the pasta and add directly into the pan with the bacon grease and garlic. Add the egg/Parmesan mixture, peas, bread crumbs and crispy bacon. Use tongs to toss around the pasta until everything is well combined and coated with sauce. Season to taste with salt and pepper. If the pasta seems dry, add some pasta water a tablespoon at a time and continue to toss with tongs.