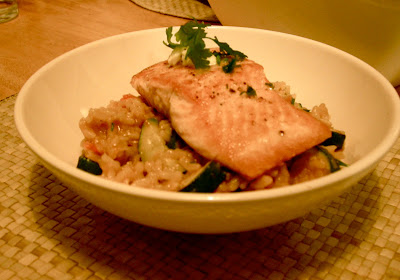 Ever since I bought truffle butter for my Thanksgiving turkey, I've been adding it to just about everything. My husband calls it "Viagra for food". I guess you could say it "perks up" just about anything. It turns a good steak into a spectacular piece of meat that you find yourself eating with your hands like a caveman and then licking the truffle butter/steak juice off your fingers. I bought an 8 oz. container of white truffle butter from Monsieur Marcel in the Farmers Market on Third and Fairfax. I then separated it into portions and filled up these little freezing containers that I used to freeze baby food in. Now when I want to make a dish more exciting I just add a bit of the truffle Viagra. It doesn't take long for the frozen butter to thaw out enough to use. At $33 a container, the stuff doesn't come cheap but if you think of its CPU (cost per use) it's actually quite a bargain.

Today my son and I went to a birthday party for a school mate of his. It was at the condor exhibit at the L.A. Zoo. We had a ball but didn't get home until almost 5pm. That meant I had an hour to figure out what to make for dinner and cook it too. There were salmon fillets, zucchini and heirloom tomatoes in the fridge. I decided just to do the salmon with a simple sear. Then I remembered I had TRUFFLE BUTTER! Now what to do with the veggies? I went through the cupboards and found the arborio rice. Perfect. A risotto with the zucchini and tomatoes would provide the starch AND veggies. I was able to put together the whole dinner in under an hour. I served the risotto in a generously sized, low bowl. Placed the salmon directly on top of the risotto. Added a teaspoon sized pat of truffle butter and then trimmed some small pieces of Italian parsley onto the fish with kitchen shears. I put a side of parmesan cheese on the table. Parmigiano-Reggiano if you can! Everyone was happy,well except for my son who will only eat rice of the Asian persuasion ie. fried rice, sushi. My baby girl even went as far as climbing onto the table and ate it out of the bowl with her bare hands! My favorite part...the truffle butter melting over the salmon and into the risotto. Oh, yeah!

2 medium-large zucchinis, sliced into half inch semi-circles
2 small tomatoes (heirloom are best, a couple different colors adds a nice touch), give them a large dice
1 small onion, finely chopped
4 garlic cloves or 3 tbsp.
olive oil
Salt and Pepper
1 1/2 cups of arborio rice
6 cups of low sodium chicken broth (substitute one cup of the broth with 1 cup of dry white wine if you have it)
Shredded parmesan cheese (optional)

Heat up the broth in a medium size pot. Add a tablespoon of olive oil to a 12 inch non-stick everyday pan. Make sure to use a large enough pan when sauteing, overcrowding will cause food to steam and not brown. Saute the zucchini for about 4 minutes on medium-high heat with a light sprinkling of salt and pepper to season. You want them to be brown but not soft. Set aside. Quickly chop up the onions. I love my mini food processor. It chops it fine in about 5 seconds and is much easier to clean than a larger processor. Add 1/4 cup of olive oil and saute the onions for about 4 minutes on medium heat until softened but not brown. Then add garlic and saute about 1 minute more. Add your rice and stir it around with the onions and garlic for a couple minutes. Now start ladling the hot broth into the rice pan and keep stirring until the liquid is almost gone. Then add more broth and keep doing this until you've used up all the broth or until the risotto is done. Add the tomatoes when you have about a cup of liquid left, you don't want to overcook them. Turn off the stove when you have tasted the risotto and it is cooked but slightly al dente. Gently stir in a teaspoon of salt, 1/4 tsp. of pepper and lastly the zucchini. Transfer the finished risotto to a nice serving bowl. You can substitute the zucchini and tomatoes with whatever vegetables you have around!

Give the pan a few minutes to cool, then wash and dry it. Heat up the pan again on medium-high heat. Rinse and dry the salmon well. Rub a generous amount of oil onto the prettier side of the fish. Salt and pepper each fillet. Place the oiled side down into the hot pan. Sear for 3 minutes (or 4 minutes if it is a thicker cut), flip,then sear the other side for about 2 minutes. Salmon is great when it's barely cooked through.
Email ThisBlogThis!Share to TwitterShare to FacebookShare to Pinterest
Labels: entrees, seafood, sides, Vegetables, vegetarian