I was catching up on recorded t.v. shows the other day and saw the tastiest looking pasta dish on The Barefoot Contessa. She had a guest chef from Nick and Toni's, a popular Italian restaurant in the Hamptons. It's basically penne alla vodka but the tomatoes are roasted in the oven for an hour and a half first. It looked amazing so I thought I'd give it a shot.


I don't like overly saucy pasta so I made half the amount of sauce with a full pound of pasta. The recipe says to put the tomatoes through a sieve but I didn't, I added all of the liquid that was in the can. I used a much smaller sprinkling of red pepper flakes since I was feeding it to the kids (beware, a little goes a really long way!). I also used half the amount of cream (which, in my humble opinion, was plenty) and added about 1/2 teaspoon of sugar.


It was really, really good!!! 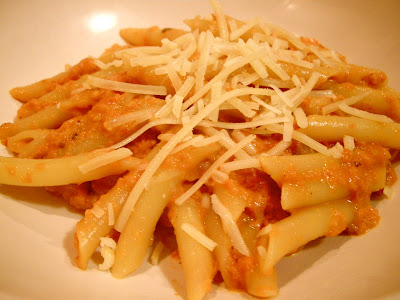 Preheat the oven to 375 degrees F.
Heat the olive oil in a large oven-safe pot or dutch oven over medium heat, add the onions and garlic and cook for about 10 minutes until translucent. Add the red pepper flakes, dried oregano and vodka, and continue cooking until the mixture is reduced by half. 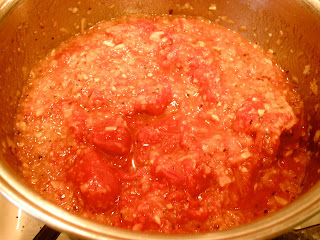 Meanwhile, crush the tomatoes with your hands, and add them plus the remaining puree in the cans into the pot. Place the pot in the oven and cook for 1 1/2 hours. 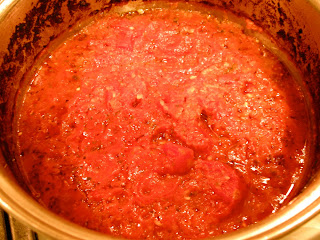 Remove the pot from the oven and let cool for 15 minutes.
Meanwhile, bring a large pot of salted water to a boil and cook the pasta according to package directions. Set aside.
Place the tomato mixture in a blender and puree in batches until the sauce is a smooth consistency, and return to the pot. 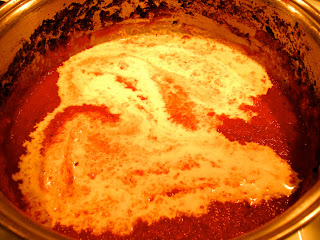 Reheat the tomato sauce and add the heavy cream, sugar and season to taste with salt and pepper. Simmer for 5 minutes. Toss the sauce with the pasta and sprinkle with Parmesan cheese, to taste. Serve immediately.
Email ThisBlogThis!Share to TwitterShare to FacebookShare to Pinterest
Labels: entrees, pasta, sides, vegetarian