My four-year-old son loves to speak like an adult. He says things like, "Well, that's convenient." or "I'm sooo frustrated!" It's hilarious. I think he is just trying to explore speech and words. Lately he's been saying, "Mom, I have a question." And his question will turn out to be a statement like, "I really love you." or "I was mad when you said that to me."

Kids are the most magical creatures on earth. They say what's in their hearts and on their minds. It's what makes them so endearing. Some of it is brutally honest though. Like when my son told me that I had a "wobbly tummy" or that my shirt made me look like a zebra. Good stuff I tell ya! Now I know where to go when I want an honest opinion.

He also has no problems telling me when he thinks something I've cooked is YUCKY. I do have a rule that he needs to take at least one bite of something before saying it's yucky. More often than not, he will end up liking it. That was the case with salmon. One night we had a battle to get him to take a small taste of grilled salmon. He finally agreed to and afterward said, "Hmmm, not bad." So when I told him today that I was making salmon for dinner, he exclaimed, "Oh salmon, I like salmon!" 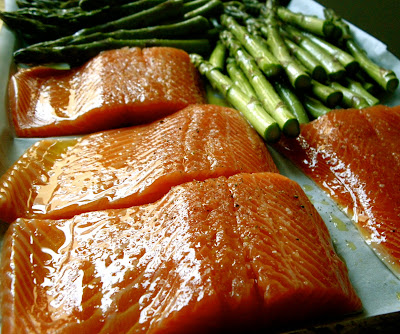 I roasted salmon fillets in the oven and made a chunky vinaigrette to go on top. My baby girl helped me mix it. I served them with leftover steamed coconut rice from last night and roasted asparagus. The asparagus I threw right onto the same baking sheet as the salmon and cooked it all in the oven together for about ten minutes. It all came out beautifully. 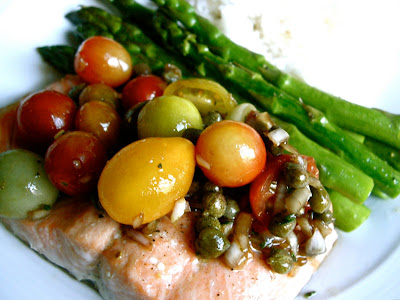 Make the vinaigrette in the meantime. 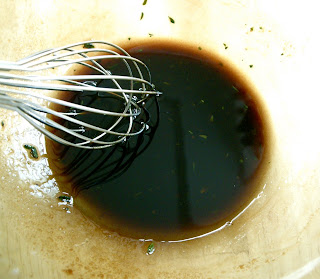 Add the balsamic vinegar, 2 tablespoons of olive oil, honey and thyme to a medium sized bowl. Whisk it all together. Add the tomatoes, shallots and capers. 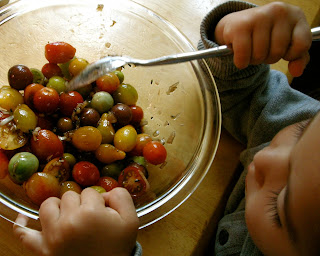 Fold everything together until combined. Set aside.

Place salmon on a baking sheet lined with parchment paper. Drizzle olive oil on top of each fillet and rub it evenly. Sprinkle with salt and pepper.

Place in the oven and roast for about 10 minutes (a little longer for thicker cuts).

Plate the fillets and spoon a generous amount of the vinaigrette on top.
Email ThisBlogThis!Share to TwitterShare to FacebookShare to Pinterest
Labels: entrees, sauces, seafood