I made dinner tonight entirely from pantry items. I was out of fresh veggies but had a bag of frozen artichoke hearts and a frozen organic peas. I also found some arborio rice. A veggie risotto would be the perfect dinner!

I let the artichokes and peas defrost in the sink during the afternoon. To kick up the flavor a bit, I decided to saute the artichokes first. When the risotto was done I stirred in some truffle butter and topped off with a healthy sprinkling of Parmesan cheese. It was heavenly!

You could serve this as a side with some grilled meats or fish. It is also extremely satisfying as a meal on its own. The cheese gives you the protein you need. 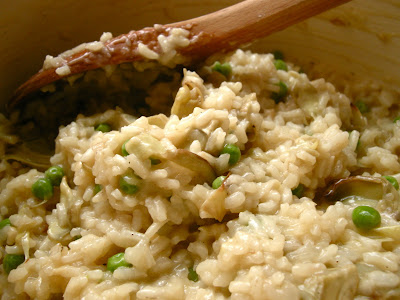 Artichoke and Pea Risotto
Heat a tablespoon of oil in medium-size pan over medium-high heat. When oil is glistening, add the artichokes and sprinkle lightly with salt and pepper. Let cook undisturbed for one to two minutes a side or until golden brown.  Set aside in a bowl.

Heat the chicken broth and wine in a medium saucepan and keep hot, but not boiling, over low heat.

Add the risotto and stir frequently for 2 minutes until it is well coated and starting to become translucent.

Add the hot broth, 1 cup at a time and cook, stirring constantly, until the rice has absorbed the liquid. Continue to add the broth, 1 cup at a time, cooking and stirring each time to allow the rice to absorb most of the liquid before adding more. This will take about a half hour. You will probably use up all of the broth but if the risotto tastes done before you use it all up, then you can stop with the process. The risotto should be just cooked through, slightly firm and creamy but not mushy.

Finally, stir in the peas and artichokes. Season to taste with salt and pepper. 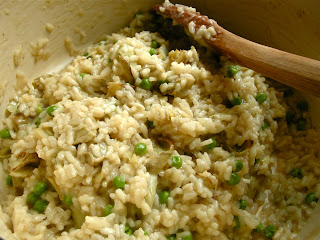 If you're really feeling fancy, stir in a couple tablespoons of truffle butter!

Transfer to a large bowl and serve with a side of good parmesan cheese.
Email ThisBlogThis!Share to TwitterShare to FacebookShare to Pinterest
Labels: entrees, sides, vegetarian